As a nonfiction writer I gravitate toward history and journalism. I can say, without embarrassment, that I love history. It is not only an interest of mine, but a passion. As long as I remember I have been interested in history. I remember, as a small kid, cutting images from books and pasting them together to make new books; with text that I wrote. More than 40 years later that childhood ambition was manifested. In 2017 my book “Wisconsin and the Civil War” was published by the History Press.

I am fairly proud of the book. The last one published on the subject was in 1997. Since then two things have happened: a fair amount of scholarship and the Internet. The new scholarship alone would justify a new history. There is new information about every aspect of Wisconsin and Wisconsinites during that crucial time. The experiences and voices of people not known or heard twenty years ago are now better known and can be heard. That is especially true for women, African Americans and Native Americans. Much original research has been done, and is being done, on these Wisconsinites during the war period, and some of it is in the book.

The Internet makes finding and using all of this new material infinitely easier than it used to be. We are able to know more about the people who were living during that time than we used to. So, I thought it was time for a retelling of the story of Wisconsin during the Civil War. Of course, a book can only present a fraction of that knowledge, new or old. Choices must be made and some topics emphasized while others are not. I have chosen to emphasize those that have not had as much emphasis before. Specifically the “home-front,” women, and Wisconsin’s African-Americans and Native-Americans. This is my telling of the story. Others would emphasize other topics. That leaves room for others to tell their story of Wisconsin during the Civil War. As I say in my Preface, the irony for historians is that the success or failure of our storytelling is determined by the degree to which we successfully tell other people’s stories.

I reference Racine people or organizations several times in the book. In fact, the book begins with the capture of Joshua Glover, and escaped slave, in Racine county and his liberation from the Milwaukee county jail by an anti-slavery crowd. I discuss the 22nd Wisconsin Infantry Regiment which I mentioned in a previous blog. And, I also profile Peter D. Thomas, a liberated slave, who served in the US Colored Troops and ultimately had a strong connection with Racine. In fact, using the passage from my book, I will tell his story now.

Given the small population of African-Americans in Wisconsin at the time of the Civil War, the way most Wisconsin soldiers interacted with African Americans was on campaign in the South. Undoubtedly, the first African American most Wisconsin soldiers encountered was as an escaped slave or “contraband” coming into Federal lines. A good example of this is the story of Peter D. Thomas, a fourteen-year-old slave in western Tennessee liberated when Wisconsin troops occupied his plantation in 1862. 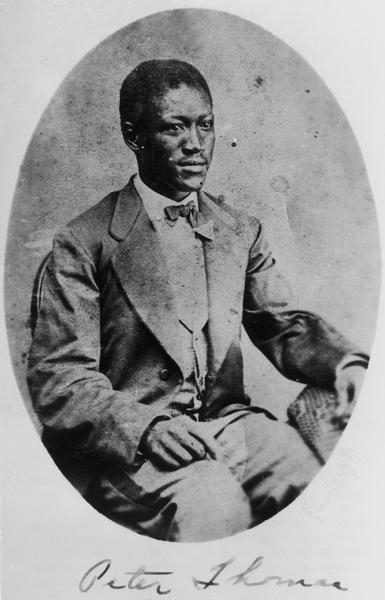 Thomas later recalled that “the Yankees came on our plantation and told us we were all as free as they were and could go where we pleased. It seemed to good to be true, but as our owners said nothing, we knew it must be true.” Thomas became the servant of Captain Charles Nelson of Company G, 15th Wisconsin Infantry. He was with him for the next year and a half and present at the Battles of Chickamauga, Missionary Ridge, Resaca and others. Captain Nelson was wounded at the Battle of New Hope Church, Georgia, on May 28, 1864. Thomas helped Nelson return to his home in Beloit, Wisconsin, to recover and worked on his farm. Several months later, Thomas traveled to Madison, Wisconsin, and enlisted in the 18th USCI. He served in the St. Louis area until November 1864, when his regiment was ordered to Nashville, where it took part in the Battle of Nashville and the pursuit of General Hood to the Tennessee River. Afterward, the regiment served at Bridgeport, Alabama, and Chattanooga, Tennessee, mustering out February 21, 1866. After the war, Thomas returned to Beloit to gain an education. When he enlisted in 1864 he had to sign his name with an “X.” He eventually became a teacher in Chicago, ultimately settling in Racine, Wisconsin in 1883,  where he was elected county coroner for a two year term. Thomas was also active in the Grand Army of the Republic serving as Junior Vice Commander for Governor Harvey Post No. l7, and was a delegate to the State and National Organizations. A chairman of the GAR headstone committee, he oversaw the Civil War plot at Mound Cemetery where 12 Union soldiers are buried. He lived until 1925.

In future blogs I will continue with my mix of Racine (or Wisconsin) related history and profiles of organizations or people who are doing things in Racine today.