The Civil War regiment most closely associated with Racine was the 22nd Wisconsin Infantry. It was Organized at Camp Utley in Racine and mustered in on September 2, 1862. Camp Utley was named in honor of Racine resident William L. Utley. Utley was the first elected marshal of Racine, a politician, and Adjutant General of Wisconsin at the beginning of the Civil War. He was also the Colonel of the Regiment. Camp Utley was used as the training ground for other regiments as well including the 4th, 22nd and 33rd WI Infantry (which had numerous men from Kenosha in it) as well as the 1st through 10th batteries of WI Light Artillery.

In 1861 a soldier wrote a letter home describing the camp: “The tent grounds are laid out in streets — about 5 rods wide, each company having its own street. Each tent has from six to eight men, and is supplied with a pail and washtub. Every man has a blanket and towel furnished him and also soap, a washbasin and various other little things to match. So you see, we are pretty well supplied with the necessaries.”

The 22nd Wisconsin Infantry was composed of three companies from Racine, two from Monroe, two from Beloit, and one, each, from Janesville, Geneva and Delavan. The regiment was particularly known for it antislavery sentiment and was called “The Abolition Regiment.”  It left the state on September 16, 1862, to serve in Kentucky.

In Kentucky, the regiment disobeyed the army policy of returning fugitive slaves. In one instance, Col. Utley was indicted by a Kentucky court and the Sheriff was ordered to arrest him. The attempt was not made.

In 1863, most of the regiment was captured. The officers and men were sent to Southern prisons. They were exchanged in May 1863 and re-equipped. The regiment then took part in Sherman’s 1864 Atlanta Campaign and fought well at Resaca, its first real battle, losing about 70 men. It fought again at Dallas, Kennesaw Mountain and Peach Tree Creek, losing another 100 men. Like so many of Wisconsin’s regiments, the 22nd Wisconsin took part in Sherman’s March to Savannah, ending with the Carolina campaign and the Grand Review in Washington in May 1865. During its service, the regiment lost 231 men, more than a quarter of them in combat. Col. Utley served until July 5,1864 when he was discharged for disability.

One of the more renowned members of the 22nd Wisconsin was John Dearborn Walker. [Featured photo at left] Born in 1851 in Pennsylvania, his parents moved to Racine when he was young. John enlisted in the Union army on September 1, 1862. He was eleven. He was one of the youngest, if not the youngest, soldier in the Union army during the Civil War. John, who claimed he was fourteen, was taken in as a musician and became a drummer with Company B. He listed his occupation when he joined as “school boy” and was four feet, three inches tall. He was captured at Brentwood, Tennessee, with the rest of the regiment and then exchanged.

He was sick for most of 1863 and was discharged for disability on December 28, 1863, at the age of twelve. His discharge papers labeled his sickness “conjunctivitis and chronic catarrh.” The following year, John’s health returned. He reenlisted as a musician in Company K of the 8th Wisconsin Infantry on July 25, 1864 and stayed with that regiment until the end of the war. He was mustered out on September 5, 1865, at the age of fourteen, standing five feet, seven inches tall.
——
Below: A photograph showing Jesse L. Berch, left, of Racine, quartermaster sergeant and Frank M. Rockwell, right, of Geneva, Wis., regimental postmaster, both of the 22 Wisconsin Infantry Regiment. Berch and  Rockwell escorted the African American woman between them, an escaped slave, from Kentucky to freedom in Ohio. Photo taken at J. P. Ball’s Photographic Gallery in Cincinnati. 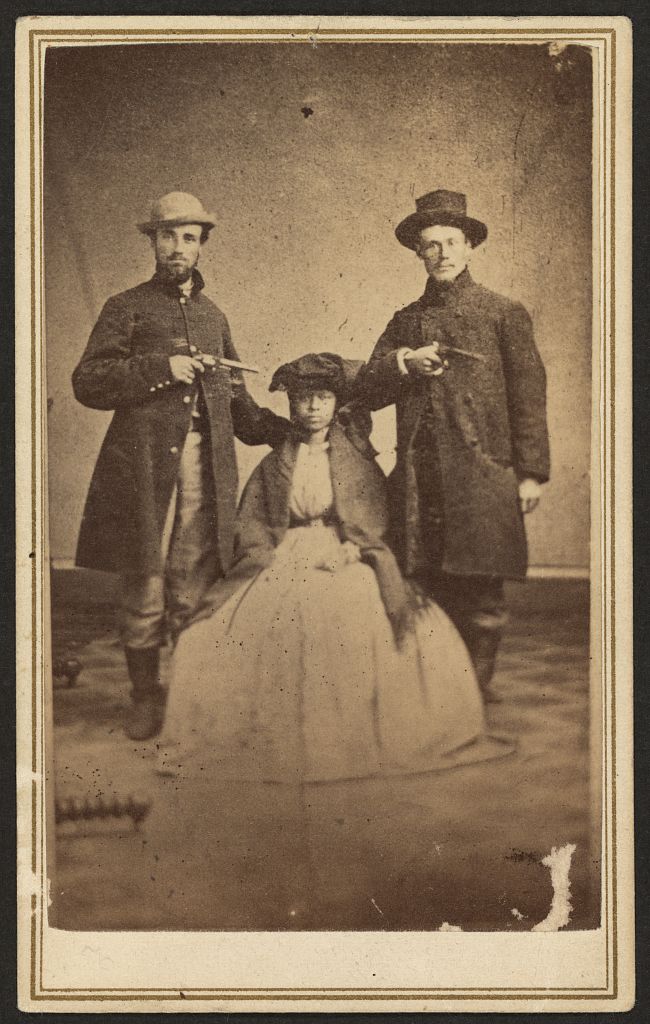